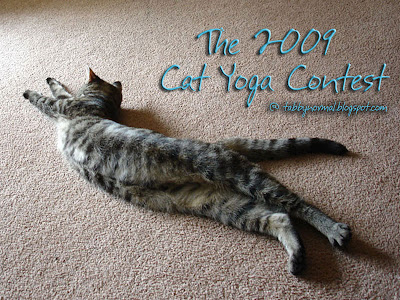 The Yoga Pose Contest winners are now official! We could not pick just one, we had to pick three of you! While everyone had something amazing to offer, we could not help but be amazed by Siena, Freya, and Ayla. Display your graphics with pride (and biggify for a better image!) Check out their blogs, and read more below about every contestants' pose:

Now we will feature a comprehensive guide for cats about Yoga, and the practice and poses you cats will most want to work on this year. We'll start with the three winners first!

SIENA: This is one of the most difficult positions not only to attain, but also to maintain: the Cirque du Chat pose. For safety's sake, if you are just beginning your Yoga practice, please do not attempt this position. although Siena certainly makes it look easy and comfortable. You may need to find a mentor to guide you safely and months of practice before you are ready. You should also check out Siena and Chilli's other great Yoga poses on their blog! 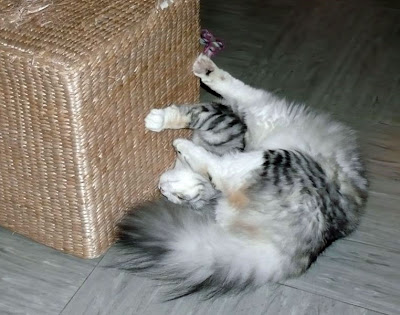 AYLA: This is called the Reverse Flat Cat Pose. While most cats have amazing flexibility, Ayla shows that North, South, East, West, and the 4th dimension may all be addressed at once during meditation. If you can do this, you can do just about anything! 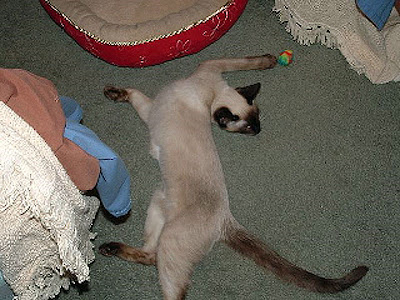 FREYA: When humans do Yoga, they value things like having a straight back. For cats, it's different. We are naturally round creatures, and Freya demonstrates the Cat Crescent Pose. The more curvature that can be accomplished while simultaneously engaging in a feat of balance, the better! 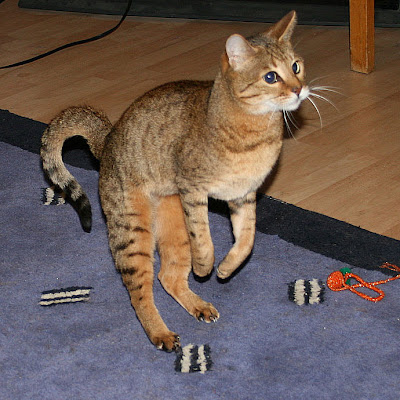 AMBROSE: Grrreta shared with us this picture of her housemate, saying, "The name of the yoga position is called Downward-Facing Dog. That sounds like woofie yoga rather than cat yoga. I think Ambrose may be having an identity crisis." To do the impossible is impressive, as is this pose! 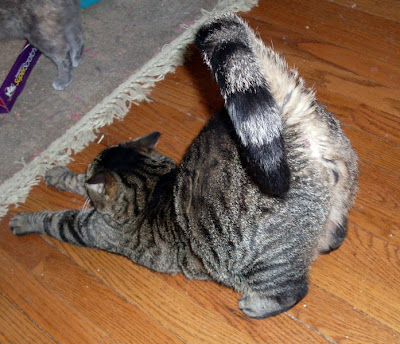 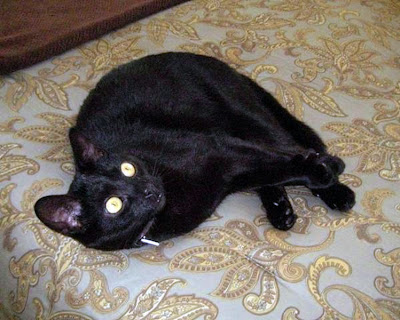 ELIN: With a consciousness for her surrounding decor, Elin performs the Cello and Bow pose, which requires stretching one leg towards the sky, while reaching under the tail. When you are really fluffy, as Elin is, Yoga can present some challenges. 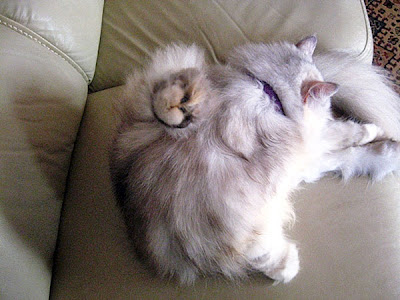 DAISY: Daisy is a very accomplished cat in so many ways, from modeling to diplomacy. Here she demonstrates again what appears to be a fairly simple stretch, The Twist, but just get down on your mat and try to do it with this kind of finesse -- it's not so easy, is it? Daisy also demonstrates a proper use of the mat, which means NO CLAWS. It is a lot harder without claws, isn't it? Hee hee. 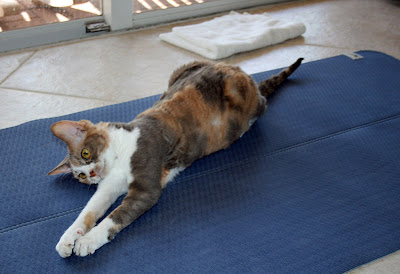 CLOUD: Cats have a lot more options than humans do when it comes to "tools" or "equipment" for practicing the art of Yoga. Here, Cloud has chosen a large and special pot to complete the My God, It's Full of Stars exercise. 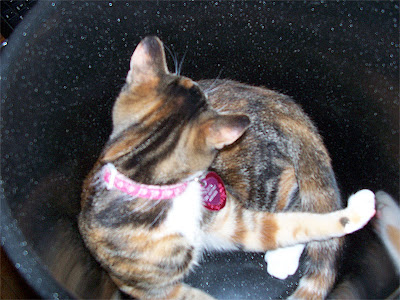 CHASE: Our humans may make fun of us because (to them) it may not look like we are doing much of anything, when in fact we are engaging in rather intense meditative activities, like Chase demonstrates below. Ideally, the entire body should relax, including the face, and often (as shown in the detail), this means fangs should show. 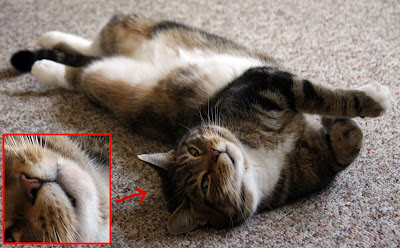 SWEET PRALINE: You may think this is an action shot, but you are wrong. With back foot raised and ears folded, Sweet Praline can hold the Ewok Pose for hours! This is one of the few positions when it is actually easier to do if you have fluff. 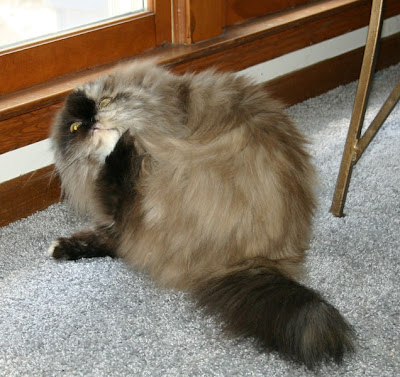 PUFF: Puff demonstrates excellent poise with a Cello pose, but at the same time also shows the dangers of practicing Yoga outside. There is always the risk of collecting little bits of dirt or other items in your fur during a strenuous session, so be sure to clean thoroughly afterwards. 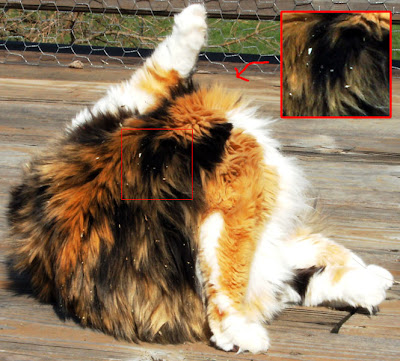 PARKER: Not every cat desires to attain this degree of skill when it comes to poses, but Parker has let go of her inhibitions to do the Y-Pose, which involves raising both hind legs to a 45-degree angle while tucking head to tail. 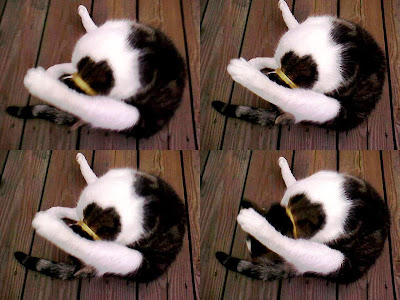 NIKO: Again, tools and props abound and are a boon for the beginning practitioner of cat yoga. As Niko demonstrates, something even as modest as a human's foot can serve as a valuable tool for the youngest apprentices. 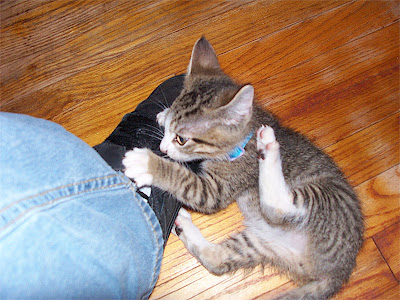 MILLIE: There is a time and a place for everything. Millie demonstrates for us the famouse Sundance pose. Not only does it offer a totally stimulating yet relaxing session in the sun, but it also helps to circulate the blood to areas that cannot be reached by simply curling up in a ball or crawling and resting on a human. 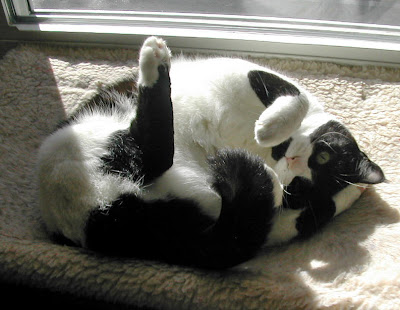 WALLY: Wally is actually a cat yoga expert, and we are surprised that he did not win this year's contest. We can only attribute it his modesty (ha ha). Nevertheless, for the uninhibited, check out Wally's Westward Stretch. It actually doesn't matter what direction you are facing, as long as your tail and front paws are all going in the same direction. 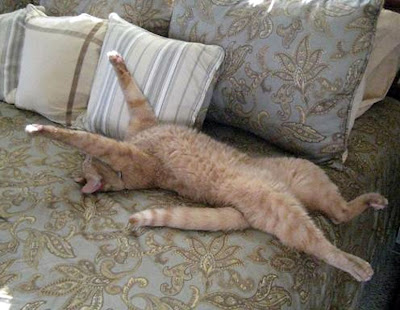 Ms. TRISTAN: Again, although this Supercat pose may seem basic to many of you, try sustaining it for a long period of time, and you will soon understand why it's so hard to remain as such. Other cats could be running by distracting you, spring smells, can-openers, and so forth.... FOCUS just like Tristan does, friends! 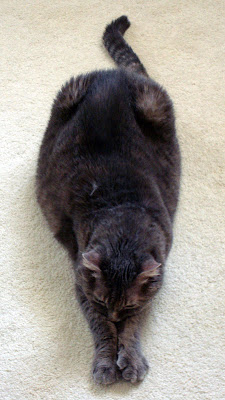 SEI-CHAN: Sei-Chan is our youngest contestant, and we know she has a lot to learn, but she is already demonstrating prowess in the limberness, stretching, flexibility, and focus departments. Who knows what next year will bring for such an inventive feline? 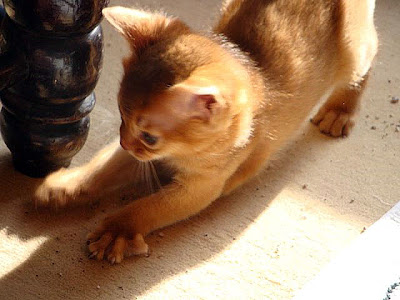 SKEETER: Though Skeeter passed over the bridge within the past year, we simply had to feature his amazing pose. The human he was in charge of explained, "Both back legs are extended forward and both front legs are tucked under the back 'knees.' The head is tucked deep into the chest in a meditative pose to blank out all sensory input." None of the rest of us have managed to accomplish this pose for any great length of time, so we greatly admire this feat. We are calling it the Skeeter Pose, of course. 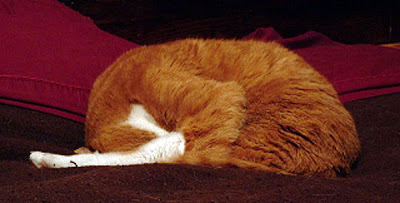 ZOEY: Finally, we wanted to present you humans with a pose that you could actually have some hope of accomplishing. Zoey demonstrates the Person Pose, which is not particularly comfortable or dignified for any cat. It is, for sure, a great cat willing to demonstrate this pose officially for the world. 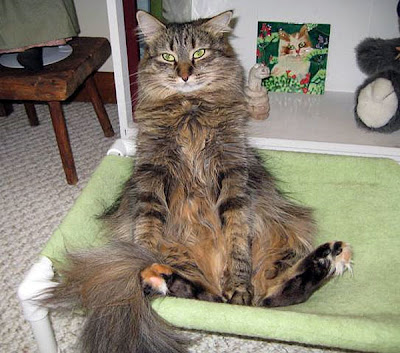 Thanks again for all the entries! It was so much fun. We have learned a lot and hope you have, too!

Scratched in by TabbyNormal at 12:02 AM

Email ThisBlogThis!Share to TwitterShare to FacebookShare to Pinterest
Labels: cats can do anything, Yoga, Yoga Pose Contest

KC and the Giggleman Kitties said...

Fantastic compilashun.
Wouldn't it make a grrreat calendar????
It is a work of art.
Love & Purrs,
KC

I agree, we should try to do it a calendar!

All are amazing snap!!

Or should I say, tossies up?

The cat yoga positions are amazing. Skeeter's is very impressive. I didn't even know a cat could do that.

Wow! This was great! What a talented group of kitties we are!

What an amazing contest and fabulous winners! Thanks for organising it, Ms.C!

Sei-Chan was all chuffed to have her photo in there!

Tommy and The Girls

Oh that was so fun to see! And congrats to Freya and Ayla! They taught us a stretch or two...even Wally, the cat yoga expert!

Great compilation! We're a bit sad though that you didn't include our picture... sob. We guess you didn't see the post we made for you?

That was SOOOOO much fun! Great job, they are all incredible entries but especial congrats to the winners!

Congratz to the dual winners. All the contest entries were just great!!!

Thank you for including me in the contest. It was lots of fun!
Pee Ess: My Mr. Linky is wrong:( My blog can be found at:
tristanandcrikey.blogspot.com

Thank you so much for such a prestigious award, and especially in my first year of entering!

You did such a wonderful job of organising the whole thing, and I particularly liked how you have gone to all the effort of writing a little caption paragraph for every entry, that's really good of you for everyone, and we all really appreciate you going to all the trouble of doing it!

So anyway, now I've won, I'm going to go and sprawl untidily on the sofa till I have to do a pose for next year's competition!

What a terrific contest! And the contestants were all so accomplished-such grace! Such tranquility! Wow. I like ML's idea-'twould make a great calendar.

Wow, those are some great poses! We need to start practicing :)

Oh Wow! I am so ecited to be a co-winner! Thank you so much, Mrs C.

Congratulations ta Freya too. And all the yoga poses were great. Im gonna be practicin somma them today!

What an awesome assortment of flexible yoga cats! Congratulations to the winners!

Those are so cool. Congrats kitties.

Great contestants. We are tired just looking at those hard to maintain poses.

Great photos - Mom took picts of us in yoga positions but couldn't remember the name of your blog to send them in!!! Oh well, next time.

Pawsome contest, clever commentary, adorable cats in poses that would be impossible for us humans and they pose with such grace. I love them all. Congrats to the winners.

Woohoo! This is great! What a lovely belated birthday present - I am very proud to be chosen as one of the winners.
Be careful: The impostor "Chili" has tricked herself into your post. The real Chilli is after her already...
Purrs, Siena

Those are fabulous yoga poses! It's great that kitties have finally found a way to relax. Our hectic schedule of naps can really take its toll. Congratulations to the winners.

Oh wow! I can't believe you managed to pick only three with so many talented kitties out there. I made me realize how much more effort I need to put into my flexibility...and relaxing...

Great job on the contest! I am with ML, that would make a great calendar along with the comments.

Pssst, hey furriends! Do us a favour and change "Chili" to Chilli. It's confusing with our consonants: Sienna - wrong. Siena - correct. Chili - wrong. Chilli - correct. But that's the way it is! ; )
Purrs, Siena & Chilli

What a wonderful contest! It was fun seeing all the poses of cats in the blogosphere!

What great yoga poses! And such insightful commentary to help others master them.

Thanks to everyone for sharing them!